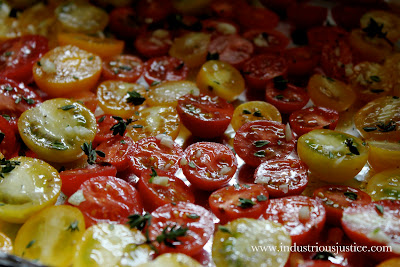 Slow roasting tomatoes is extremely easy and the result is little bites of delicious, concentrated tomato flavor. I served the tomatoes mixed up with some halved olives for people to nibble on but these tomatoes would also be wonderful on top of a pizza or mixed into pasta or a salad. There are so many possibilities.

I started with approximately three cups of heirloom cherry tomatoes which yielded approximately one cup of slow roasted tomatoes. I roasted mine for six hours and liked the resulting tomato bits. You can adjust the ingredient amounts and cooking time to your liking.

Did I mention that they are super simple to make? They are! They are so easy.

Directions:
Spray a large baking sheet with nonstick cooking spray and arrange the halved cherry tomatoes in a single layer on the baking sheet. Drizzle tomatoes with olive oil and sprinkle with minced garlic, thyme, and season with salt and pepper.

Put the baking sheet in the oven, turned off, and set temperature to 200º F. Bake for 6 - 7 hours, until the desired level of roasting is reached.

Remove the tomatoes to an air tight container and refrigerate until ready to use.