My second resolution of 2011 is to read at least a book a month.

The first book I completed was Daniel Woodrell's, Winter's Bone.  Set in the Ozarks, the story centers around Ree, a 17-year-old hunting down her father who has skipped bail on charges of running meth labs. She must find him in order to ensure that her impoverished family, consisting of her mentally incapacitated mother and younger brothers, retain their home.  It was a powerful and quick read.  I realized how well the author described the Ozark winter environment when I had to put on a sweater.  The film adaptation won the Sundance Film Festival and I want to see it now that I have finished the book. 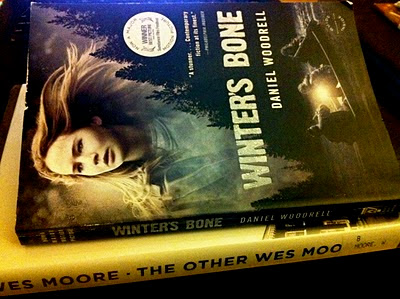 My second book of 2011 is Wes Moore's, The Other Wes Moore: One Name, Two Fates.  I have only read the intro but so far it is an engaging story and I am eager to learn more about the lives of both men.

I have a few other books in my "to read" queue but if anyone has any recommendations, I am making a list of other books I want to read this year.
Posted by emily at 11:15 PM